WINNERS AND LOSERS IN THE AMERICAN CAPITALISTIC ECONOMY: A PRIMER 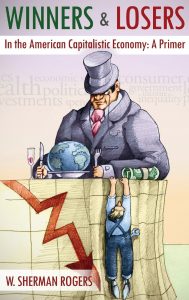 Economists generally agree that the new global economy has raised living standards for people around the world. But they also acknowledge that it has suppressed the incomes of low-skilled workers in rich countries such as the United States. Indeed, some economists blame income inequality for the rise of the terrorist organization ISIS and for the increase in suicides among middle class white Americans. And the diminishing fortunes of the American middle class is fueling voter unrest during the 2016 presidential primaries. These issues—fueled by arguments concerning the appropriate role of government in providing a remedy—will undoubtedly continue well beyond the 2016 presidential elections.

Recent studies indicate that the income of the American middle class is shrinking at a faster rate than that of Americans in the lower income brackets. These studies indicate that an increasing number of people in the middle class are falling into the ranks of the poor. On the other hand, Americans in the higher income brackets are experiencing a continued increase in their incomes while their numbers edge upwards in the general population. 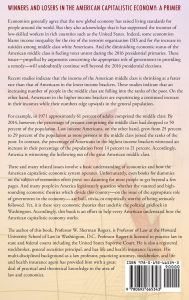 These and many related issues involve a basic understanding of economics and how the American capitalistic economic system operates. Unfortunately, even books for dummies on the subject of economics often prove too daunting for most people to get beyond a few pages. And many people in America legitimately question whether the vaunted and high-sounding economic theories which divide this country—on the issue of the appropriate role of government in the economy— are bull, trivia, or empirically worthy of being seriously followed. Yet, it is these very economic theories that underlie the political gridlock in Washington. Accordingly, this book is an effort to help every American understand how the American capitalistic economy works.

The author of this book, Professor W. Sherman Rogers, is Professor of Law at the Howard University School of Law School in Washington, D.C. Professor Rogers is licensed to practice law in state and federal courts including the United States Supreme Court. He is also a registered stockbroker, general securities principal, and has life and health insurance licenses. His multi-disciplined background as a law professor, practicing attorney, stockbroker, and life and health insurance agent has provided him with a great deal of practical and theoretical knowledge in the area of law and economics.

Purchases by Libraries, Book Stores, and Other Retail Outlets