The African American Entrepreneur Challenges and Opportunities in the Trump Era, 2nd Edition 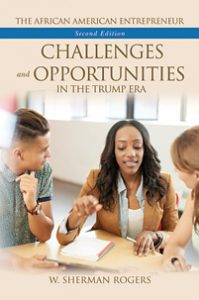 This second edition provides both a history of black entrepreneurship in America throughout all periods of American history and a roadmap that explains the steps that prospective entrepreneurs must take to achieve success in business.

This second edition of The African American Entrepreneur explores the lower economic status of black Americans in light of America's legacy of slavery, segregation, and rampant discrimination against black Americans.

The book examines the legal, historical, sociological, economic, and political factors that together help to explain the economic condition of black people in America, from their arrival in America to the present. In the process, it spotlights the many amazing breakthroughs made by black entrepreneurs even before the Civil War and Emancipation.

Part One explores the history of African American entrepreneurs from slavery to the present; Part Two provides a primer and roadmap to success for aspiring entrepreneurs.

W. Sherman Rogers is professor of law at the Howard University School of Law in Washington, DC. Rogers is licensed to practice law in state and federal courts including the United States Supreme Court. He is also a registered stockbroker and general securities principal and has life and health insurance licenses. His multidisciplinary background as a law professor, practicing attorney, stockbroker, and life and health insurance agent has provided him with a great deal of practical and theoretical knowledge in the areas of law, entrepreneurship, and economics.

Purchases by Libraries, Book Stores, and Other Retail Outlets

Libraries and retailers such as college book stores and other retail outlets can order the book from Ingram Book Company at the following number: (615) 793-5000.